The featured reader for December 4 is Bobby Crawford. 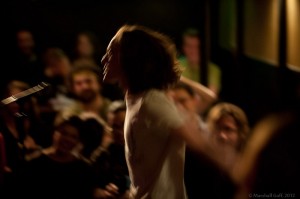 Bobby Crawford is the “one-man-boy-band” of Emerson College. Bobby competed on three consecutive College Unions Poetry Slam Invitational teams representing Emerson (2011-2013). He also served as a curator of the Emerson Poetry Project from 2012-2013, where he was instrumental in helping the EPP win Emerson’s Student Organization of the Year. Bobby competed at the 2013 National Poetry Slam with the Mill City Slam team from Lowell, Mass. and represented the Boston Poetry Slam at the 2013 Individual World Poetry Slam in Spokane, Wash., ranking 15th out of 70. A competitor and showman by instinct, Bobby is a retired nationally-ranked figure skater and a former chess-club kid. He plays harmonica and wears a leather jacket.