Tips from the Bar: Something Simple for a Change

What a week it’s been so far at the Boston Poetry Slam. After a rollicking, hilarious show at the Encyclopedia Show on Monday (don’t forget to check out our season finale on April 21, by the way), we had just a day to recover before preparing for a visit from our very favorite president ever, Scott Woods! Scott trekked all the way from Columbus, Ohio, to explain why is still a librarian, what kind of student would steal your Nina Simone CD but not your vodka, and how the problem, actually, is not the watermelon.

You can get Scott’s book, We Over Here Now, online at Brick Cave Books… Or grab one in person tonight (Thursday, March 20) at his Slam Free or Die show in Manchester. You also can thank BPS official photographer Rich Beaubien for a few of these cool shots he took of Scott last night: 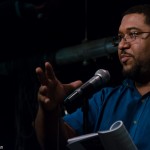 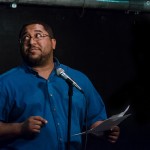 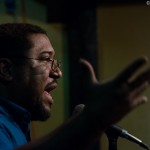 Scott Woods gets up off the page at the Cantab Lounge on Wednesday, March 19, 2014. Photo by Rich Beaubien.

Speaking of Manchester: how many nights a week does SFoD workshopper and BPS 2013 team member Ed Wilkinson do poetry, anyway? Last night, Ed took the speed slam after a crazy tie in the one-minute round over Lowell’s own King of the North, the villanelle-loving Nathan Comstock. (If you missed out on the show, by the way, you can make it up to Ed by joining him for his Cantab feature on April 9.)

So ends our last open slam of March… Which means that next week must be THE BOSTON POETRY SLAM TEAM SELECTION FINALS! Excuse our volume: that’s just a little bit like the sound of nine poets checking the mic at once in preparation for our three-round zero-elimination slam next week. At the end of the night, the top five poets remaining will represent the Boston Poetry Slam at the 2014 National Poetry Slam! Remember, it’s a $5 cover to help us get all the way to Oakland this year, so pack a sawbuck and a slam-newbie friend and come out to help us select the team next Wednesday.