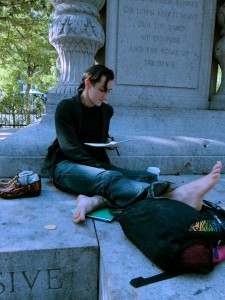 Corrina Bain is a gender-nonconforming artist, activist and educator whose poetry on page and in performance addresses and illuminates issues of transgression, particularly related to sexuality, gender, family and religion/mythology. Fueled and informed by past work in a detox center, an abortion clinic, a rape crisis hotline, and as a volunteer educator responding to the HIV/AIDS epidemic in Mozambique, Corrina’s poetry embraces and expresses the grit and fury and endurance of humanity.

Corrina’s work has earned a spot on four National Poetry Slam rosters and an opportunity to compete at the Individual World Poetry Slam competition in 2004, as well as featured performances throughout the country both solo and with luminaries including Dorothy Allison, Patricia Smith, Buddy Wakefield, Jim Carroll, Tobias Wolff, Nick Flynn, and Paul Muldoon. Journals including Danse Macabre, decomP, Killauthor, PANK, Muzzle, and The November 3rd Club have published Corrina’s work and a spoken word concept album, “Distilled,” created in collaboration with musician Tom Inhaler, focused on the experience of addiction. Recently, Corrina was a featured performer with Boston-based queer performance art troupe The Femme Show.

Note that tonight’s open poetry slam is a speed slam 3-, 2-, and 1-minute rounds. This is the last chance for a winner to qualify for the 2014 World Qualifier.

This show in our weekly Wednesday series takes place at the Cantab Lounge, 738 Massachusetts Ave. in Cambridge. Doors for the show open at 7:15. The open mic begins at 8:00 and the feature performs at approximately 10:00. The Last Chance Slam in the speed series will follow. The show is 18+ (ID required) and the cover charge is $3.