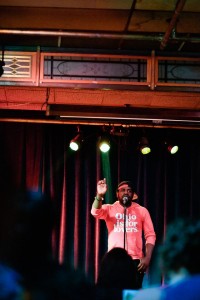 Hanif Abdurraqib writes poems when he is not sitting in his Columbus, Ohio apartment eating red velvet cake, or judgmentally thumbing through your record collection. His first collection of poems, Three Crosses, was released in December 2012, and his second collection, Sons of Noah, is forthcoming from Tired Hearts Press in 2014. He wants you to tell him your top 5 albums of all time.

This show in our weekly Wednesday series takes place at the Cantab Lounge, 738 Massachusetts Ave. in Cambridge. Doors for the show open at 7:15. The open mic begins at 8:00 and the feature performs at approximately 10:00. The Last Chance Slam, the final open poetry slam to qualify for the 2014 Boston Poetry Slam Team, will follow. The show is 18+ (ID required) and the cover charge is $3.