Cantab Returns from National Poetry Slam PLUS: Announcing a Feature from Sarah Brickman 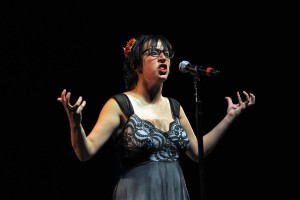 Sara Brickman is an author, performance artist, and the 2011 Seattle Women of the World Poetry Slam Champion. She appeared on the 2013 National Poetry Slam finals stage performing her poem, “Letter from the Water at Guantanamo Bay,” which was selected for the Golden Poem Showcase.

Sara’s booklength manuscript of poems, “Houdini’s Daughter,” has been a three-time finalist in Write Bloody Publishing’s annual manuscript competition. She performs nationwide and was showcased at the 2010 Individual World Poetry Slam Finals. She has been a featured artist at the Bumbershoot Music Festival, Le Poussion Rouge, and countless readings and poetry slams across North America. A member of the 2011, 2012, and 2013 Seattle Poetry Slam teams and three time finalist at the Seattle Grand Slam, Sara works at the literary arts center Richard Hugo House, and has taught poetry, performance, and creative non-fiction at the Bent Writing Insititute, Richard Hugo House, and elsewhere. In 2010 she founded a multimedia performance series in her living room called the Hootenanny, which has showcased nationally known artists such as Mighty Mike Mcgee, Led To Sea, Jon Sands, Karen Finneyfrock, and more. Her work has been published in literary journals such as Bestiary Magazine and Hoarse. She would really enjoy doing the robot with you.

Charley Pope is a writer and performer currently living in Seattle, WA. He graduated from Hampshire College in 2011, despite having spent four years avoiding his homework by writing poetry and hanging out at the Cantab Lounge. He now spends the majority of his time making movies and writing short fiction about outer space. A true astronomy geek, Charley is currently producing an animated film entitled “A Stupid Story About the Moon,” which he hopes to have available at his show this August.

Charley was not able to travel east for his feature on this date, but he’s promised to rebook with us soon.