Due to a plumbing emergency at Radio, this show has been canceled! We apologize for the inconvenience and hope to reschedule these talented guys soon. Please email the curator with any questions. 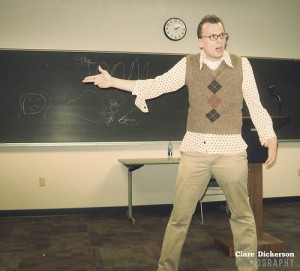 FEATURED POET: Robbie Q. Telfer is a touring performance poet, having been a featured performer/reader in hundreds of venues across North America and Germany, most prominently with the spoken word show The Revival. His work appears in Spoken Word Redux, the American Book Review, Octopus Magazine, cream city review, and decomP magazinE, as well as several spoken word anthologies and DVDs.

Robb is also the co-founder and curator for The Encyclopedia Show, a live literary variety show being staged independently in cities around the world and scheduled to premiere at Radio on Monday, September 3! He’s been in two documentaries (from HBO and Siskel and Jacobs) for his work at Young Chicago Authors, where he organizes the world’s largest teen poetry festival, the original Louder Than A Bomb. He’s written on two video games, is the poetry correspondent for TimeOut Chicago, and in 2007 was an individual finalist at the National Poetry Slam. His first published book of poetry, Spiking the Sucker Punch, was released in 2009 from Write Bloody Publishing. 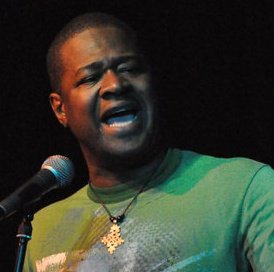 FEATURED MUSICAL ARTIST: If you try to pin him down, the Jamaican-born “Poet Educator Actor Communicator Entertainer” will say he’s from Boston MA, Brooklyn NY and Providence RI. with time spent in NC and ATL… Inphynit (Marlon Carey) is a Hip Hop Poet with a passion for words and microphones. You could call him an MC– after all, those are his initials. Inphynit (a name given to him after a seemingly endless night of rhyming with friends) has been in many a freestyle cipher and has graced many a stage. He has released a few mixtapes and has been in several videos, yet lately, he has been restless– not for the fame and fortune he dreamed about as a kid, but for the real lyricists to step forward out of the shadows. “Sometimes, it seems as if there are no relevant songs on the radio anymore. The majority of big-label artists are still preaching money-rap and the economy is in shambles…”. Tired of just complaining and being called a mere hater, Inphynit decided to create music that would help bring about some of the “balance” to the game that Boston emcee Akrobatik was talking about.

So with some great blessings from his closest friends and a lot of hard work, the artist also known as Marlon Carey began to learn how to record and mix his own music. After much trial and error, he found a comfortable groove and now produces material that, though rough around the edges and off the wall at times, is honest and thought-provoking and most importantly, fun. As he put it once “Why do the wack rappers who ain’t saying nothing always get the best beats??” This was the creation of “Smart Hop,” a music that is chock full of conscious content, delivered with the all-important swagger, over club and radio-ready beats. His latest release is the End of the World Mixtape: OCCUPY Your Mind. You can check out his tracks for yourself at ReverbNation and SoundCloud!