Tips from the Bar: If You Lived Here, You’d Be Leonardo da Vinci by Now 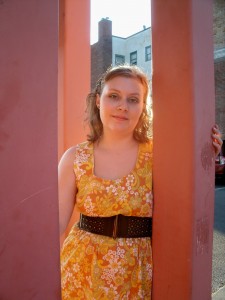 Ellie White has been trying to teach people how to hallucinate since 1986. She recently graduated from The Ohio State University with a BA in English, and is in the process of applying to MFA programs for 2013. Ellie has competed in the College Unions Poetry Slam Invitational, the Rustbelt Regional Poetry Slam, the Individual World Poetry Slam, and the Women of the World Poetry Slam. She self-published her first book of poems, Save Your Echoes, in October 2011. She has been writing and living in Columbus, Ohio since 2010. Ellie shares her tiny apartment with a punk-ass costume-wearing cat and a lazy leopard gecko.