Tips from the Bar: You Aren’t Invited, But You’re Invited 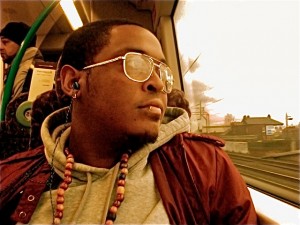 Danez Smith is a poet, performer, and playwright from St. Paul, MN. A senior at the University of Wisconsin-Madison and a founding member of the First Wave Hip-Hop Theatre Ensemble, he has also been a slam champion of the Minneapolis and Madison Poetry scenes. Danez has established himself as a performer, writer, teacher, and personality in his many worlds, placing 6th at the 2011 Individual World Poetry Slam.

A Cave Canem fellow, he is published in PANK, Illumination, Orange Quarterly, and elsewhere. His one-man theatre production “For Those Who Pray In Closets” is receiving critical acclaim and standing ovations wherever it is performed.

Danez has traveled across the country and the globe to Mexico, Panama, Switzerland, and England to perform poetry and theatre. A young artist walking and writing in the footsteps of Balwin and Hughes, Danez seeks to continue to be a voice for hushed choir boys, the walking shadows, the joy, hurt, and journey of the black, queer men. Pulling from his artistic endeavors in music and theatre, his voice on the page sings of his old soul, his experienced youth, his treasured mistakes, and all the things that imagine him human.