Tips from the Bar: The Z Prompt 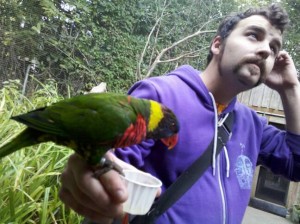 Stephen Meads is for the birds? Photo by Bryna Sampey.

Stephen Meads is a writer of things. His unmatched energy, incredible wit, and acrobatic performances made him an integral member of the Bay Area’s collaborative writing and performing ensembles from 2005-2011, and he annually serves as one of three panel judges for the National Poetry Slam’s legendary Nerd Slam. Stephen was a member of the Tourette’s Without Regrets 2011 slam team, the Berkeley 2010 slam team, and Oakland’s 2009 slam team, as well as San Francisco’s 2008 and 2005 teams, this last of which placed 6th at that year’s National Poetry Slam. Stephen is currently making his home in Portland, Oreg. where he has taken on occasional hosting duties as part of the Portland Poetry Slam.