Tips from the Bar: Christopher Kain is What Kind of Puma? 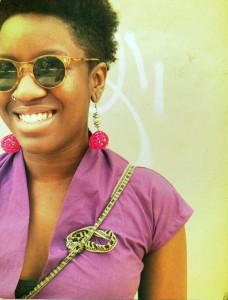 Angel Nafis is an Ann Arbor, Michigan native, where she resided as the VOLUME youth poetry project’s Poet in Residence at the Neutral Zone Teen Center for two years. She represented Ann Arbor in the Brave New Voices festival two years in a row as a member of the Youth Slam Team, performing on the final stages at the San Francisco Opera House and the Apollo Theater in Harlem. Her work can be stumbled upon in FOUND Magazine’s Requiem for a Paper Bag, Decibels, GirlSpeak Webzine, The Bear Rivers Writing Conference Online Magazine, and Muzzle.

In 2011, she represented the LouderArts poetry project at both the Women of the World Poetry Slam and the National Poetry Slam. She is an Urban Word NYC Mentor. Her chapbook BlackGirl Mansion will be released through Red Beard Press in 2012. She currently curates and hosts a poetry reading series in Fort Greene, Brooklyn. She’s never leaving Brooklyn.