Tips from the Bar: Oh, God, the Bees 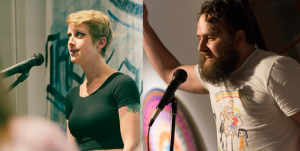 Julia Gaskill is a writer and professional daydreamer hailing from Portland, Oregon. When she’s not reviewing books or working for Pencil Ink Productions, she can be found performing on the Portland Poetry Slam stage, exploring the Pacific Northwest, or walking your dog. Julia competed in IWPS and WOWPS in both 2016 and 2017, was the Portland Poetry Slam rep at WOWPS 2018, and competed in NPS 2017 in Denver, CO. Her work has been featured on FreezeRay Poetry, Slam Find, Write About Now, Rising Phoenix Review, and Voicemail Poems. It goes without saying that she loves Muppets more than you. Find her work on tumblr, Instagram, or Twitter.

Stephen Meads, originally a Bay-based poet, has been living and performing in Portland for over six years. He has featured at slams all across the country,from Portland, Maine to Honolulu, Hawaii. Stephen stormed IWPS in 2013, 2014, 2017, and has competed in the National Poetry Slam five times with various teams. He has been featured on Drunk in a Midnight Choir, Slam Find, Write About Now, and Button Poetry, and he occasionally contributes to the web-site Nailed. Stephen eats a lot of pizza, is the champion of pro-wrestling factoids, and hates writing poet bios. Visit Stephen at his website.