Tips from the Bar: School Daze 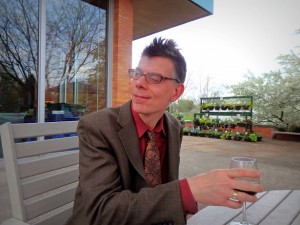 Scott Beal’s first full-length collection, Wait ‘Til You Have Real Problems, was published by Dzanc Books in November 2014. His poems have appeared recently in Rattle, Prairie Schooner, Beloit Poetry Journal, Muzzle, Southern Indiana Review, Sonora Review, and the 2014 Pushcart Prize anthology. Scott teaches in the Sweetland Center for Writing at the University of Michigan and serves as Dzanc Writer-in-Residence at Ann Arbor Open School. He co-authored Jangle the Threads with Rachel McKibbens and Aracelis Girmay (Red Beard Press, 2010) and Underneath: The Archaeological Approach to Creative Writing with Jeff Kass (Red Beard Press, 2011).

Scott has competed in the Individual World Poetry Slam and has been a featured performer at schools, bookstores, and poetry slams around the country, including the Green Mill in Chicago, the Nuyorican Poet’s Cafe in New York, and the Cantab Lounge in Boston. He curates and co-hosts the Skazat! monthly poetry series in Ann Arbor, Michigan, where he plays cards and watches Adventure Time with his two daughters.