Cantab Feature for Wednesday, August 19: Sam Mercer and the Champion of Champions Slam 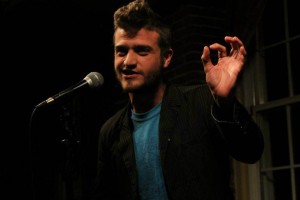 Sam Mercer is a Portland-based poet who writes about complicated things like addiction, depression, and home in the simplest ways he can. He has competed with the Port Veritas slam three times, twice on their national team and once at the Individual World Poetry Slam, and once with Slam Free or Die on their national team. Sam believes that poetry has been a large part of his life and sobriety and hopes to continue giving back to his communities in any way that he can. His work can be found in Drunk in a Midnight Choir and the True Port Anthology. He likes bad movies, uranium, and smoking too many cigarettes for someone with a basically nervous disposition.

Tonight also marks the final night in our current 8×8 poetry slam series! Eight slam winners will slam off for the season championship and the opportunity to replace the outgoing Champion of Champions Sean Patrick Mulroy.