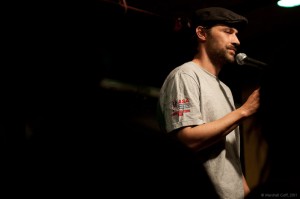 Michael E. Quigg, known to some as “Q”, has been a regular at the Boston Poetry Slam at the Cantab Lounge since March of 2008. A self-educated, self-taught high school dropout, Q wandered into the Cantab knowing only a smattering about performed poetry; by the end of the year 2008, he’d moved into the opening doorman spot and become a steadfast volunteer and resource for the community. Although you may occasionally catch him on the open mic, he’s more likely to be found working behind the scenes at just about any and every Boston Poetry Slam event, including as house manager for the Cantab during the 2011 National Poetry Slam.

Q has co-hosted The SpeakEasy Cafe’s Sound of Ink, an internet radio open mic on BlogTalkRadio.com, since November of 2007, and works as the Director of PR and Media for Mass United FC, a local soccer club. And he has a real job too. And he’s married… And just may have built some kind of time machine in his basement to help him find a way to do all this.