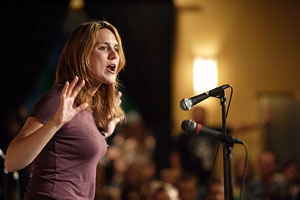 Dawn Gabriel, a once upon a time sometime co-host at the Boston Poetry Slam, has been writing and performing poetry for something like twenty years. The Worcester Telegram and Gazette has called her an “extraordinarily captivating performer, marrying engaging language and imagery with an outrageous sense of humor and comic timing.”

Dawn toured with Lollapalooza in 1994, competed on the Finals stage at the 1997 National Poetry Slam as a member of the fourth place Worcester team, and has been on three other national slam teams (Providence, Boston 2005, and Boston 2006). She has performed at the Seattle Poetry Festival, the Boston Globe Book Fair, and First Night in three cities. Her poetry has been published in numerous anthologies, including the book Knocking at the Door: Approaching the Other, published by Birch Bench Press.