Tips from the Bar: Prompt from Afar 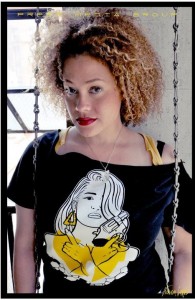 Suzi Q. Smith lives with her brilliant daughter in Denver, Colorado. Her work has appeared in a few magazines and anthologies, and she lives her life writing, performing, in addition to leading workshops on writing and performance. She has shared stages with the late Gil Scott Heron, Les Nubians, Dead Prez, Rev. Run, Talib Kweli and many more, performing at colleges and universities, night clubs, coffee houses, and festivals throughout the U.S. Her slam titles include top honors in 2012 and 2013 at the Taos Poetry Festival, Finalist at the 2013 Women of the World Poetry Slam, 2012 Southwest Shootout Champion, and Finalist at the 2011 Individual World Poetry Slam.

In Denver, she currently works with Slam Nuba, Denver Minor Disturbance Youth Poetry Slam, and Flobots.org. She is the founding Slammaster of Slam Nuba, and she serves on the Executive Council of Poetry Slam, Inc.

You can listen to a preview of this show, as well as learn more about the history of the poetry slam, at Radio Boston’s ARTery show, featuring Caroline Harvey.