Tips from the Bar: Rumors of the Alpacalypse Have Been Greatly Exaggerated 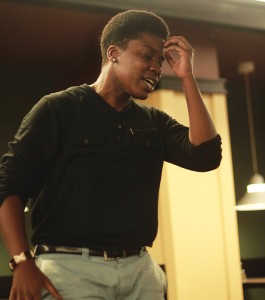 Janae Johnson performs at the Emerson Poetry Project. Photo by Evan Walsh of the Berkeley Beacon.

Janae Johnson is a spoken word performance artist originally from the “mean and preppy suburbs” of Sacramento, California. Shortly after moving to Boston in 2010, she attended her first poetry slam at Lizard Lounge and immediately became addicted to the spoken word scene. As a former collegiate basketball player at Virginia State University, Janae uses poetry slams to fuel her competitive edge; and uses writing to become a more creative, loving, conscious and well-rounded human being.

A two-time slam team member for the Lizard Lounge, she was part of the powerhouse top-20 team from this year’s National Poetry Slam. She is the reigning “Lizard Queen” at the eponymous Lounge (the venue’s top slam title) and she also acts as coach and advisor for the Simmons College Slam Team.