Tips from the Bar: Selling Rain 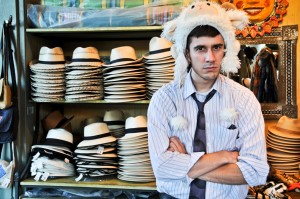 “There is nothing quite like the manic, whacked out, no holds barred poetry of Justin Lamb.” – Wess “Mongo” Jolley, poet and host of the Indiefeed Performance Poetry Podcast

Justin Lamb is an educator, writer and a 2013 National Poetry Slam champion. A three-time member of Team Slam New Orleans (Team SNO), he won the 2012 Slam New Orleans Grand Slam as an individual competitor. In 2013, Justin released a live performance poetry album titled However It Turns Out Is Perfect. As an undergraduate at Boston University, Justin cofounded “Speak for Yourself,” Boston University’s spoken word poetry group. Also, he likes treats. He may be reached through his website, justinpoet.com.