The Encyclopedia Show: Somerville for Monday, February 4 — S1V5: THE FUTURE 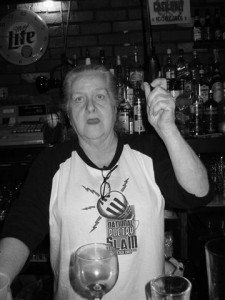 Judy Griffin behind the bar around 2007. (Judy’s shirt is from the 1999 National Poetry Slam.) Photo by Caroline Harvey.

With a heavy heart, the Cantab community is sad to share that the Boston Poetry Slam’s beloved bartender, Judy Griffin, passed away on Tuesday, January 29. Judy served as bartender from the second year of the slam’s twenty-years-and-counting tenure at the Cantab Lounge, dispensing complementary drinks, on-point heckling, congratulations on a win, or no-nonsense advice, depending on her no-punches-pulled assessment of the poem.

Whether business was slow or brisk, Judy was as much an audience member as a bartender, and a poet could mark a great night at the Cantab by a gruff nod from under the red lights, sometimes accompanied by a little extra in the glass. She worked the entire room from the back of the bar; no matter who was organizing what was happening on stage, Judy was always the boss. Any number of poets called her “the grandmother I never had,” although she was nearly as likely to be hailed as “the grandmother I want to be.”

Many of our regular poets were carded and served their first legal drink by Judy, some remarking that a real twenty-first birthday only happens on a Wednesday. Respectful of our sober poets’ boundaries, she was also known to have mixed and named an eponymous all-juice drink for Jack McCarthy, and she welcomed all of-age soda-drinkers to pull up seats at the bar. To our knowledge, she never took the stage… Unless you count the bar as the stage, in which case she served up more poetry than anyone else in the room.

Her son Gordon extended a specific invitation to the poets of the Cantab to attend services for Judy. Visiting hours are Sunday, February 3, from 2:00 to 6:00 p.m. at the DeVito-O’Donnell Funeral Home, 1145 Mass Ave. in Arlington (77 MTBA bus line). A service will be held at the same location on Monday at 11:00 a.m.

Attendees are invited to bring flasks to the Monday service only, as Judy’s wishes were said to be that “no one be sober and crying.”