The 2018 Boston Poetry Slam Team was selected through the Cantab’s traditionally rigorous seven-poem slam series, culminating on the vernal equinox, March 21. The team was composed of Neiel Israel, John Pinkham, Meaghan Ford, Allison Truj, and Sara Mae, and contains one Aries, once Cancer, one Aquarius, two Tauruses, and 100% science. Consider them prepared to enjoy you and/or openly accept your mutual incompatibility, and also to represent the Boston Poetry Slam at the Cantab Lounge in Chicago at the 2018 National Poetry Slam in Chicago, Illinois. 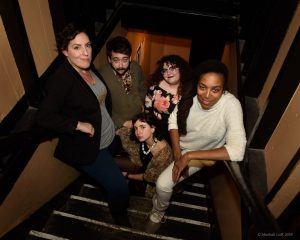 The top scorer in 2018 competition, Neiel Israel is an internationally acclaimed poet, vocalist, and arts educator who reports that her first time performing a poem on stage came at the Cantab Lounge. Emerging from UMass Boston with a B.A. in English, Neiel quickly distinguished herself as a powerful and lyrical poetic voice in the Boston slam scene. As an international teaching artist, Neiel leads workshops and classes in creative writing for schools, community programs, and colleges, and she is presently the America SCORES Boston Poet in Residence. She was a five-time member of the Lizard Lounge National Poetry Slam Team (2011-2015) as well as the Lizard Lounge Representative for (2011) Women of the World Poetry Slam, and this will be her third year in a row with the Boston Poetry Slam.

John Pinkham is a spoken word poet from Boston. He is a social worker, ofttimes bartender, and generally sleepy. Drawing inspiration from his family’s Boston Italian roots, his poems can be paired with a large iced regular from Dunkin Donuts and a pizzelle cookie. John represented Slam Free or Die (NH) at the 2017 National Poetry Slam in Denver, and comes home to the Boston Poetry Slam as a team member for the first time.

Meaghan Ford is a queer writer from New Jersey who was voted Most Likely to Leave and Never Come Back. They are a member of the 2018 Boston Poetry Slam Team, a National Poetry Slam Semi-Finalist, and received their MFA from Emerson College. Some of their work has appeared or is forthcoming in NAILED, PANK, Danse Macabre, and the Write Bloody, We Will Be Shelter Anthology. Meaghan returns to the Boston Poetry Slam team this year for the first time since 2014.

Allison Truj is an award-winning designer and performing artist based in Boston. She is author of two chapbooks, Minimum-Wage Paleontologist and My Relationship Compatibility with You Based on Our Astrological Signs. She is co-coach of the Emerson College CUPSI team, Production Manager of Ploughshares Literary Journal, co-host of the breakfast podcast Most Important Meal, and she probably likes you. This is her first year on the Boston Poetry Slam Team.

Sara Mae is a Taurus sun and a public cryer, otherwise known as a slam poet. She is a head organizer for the Feminine Empowerment Movement Slam (FEMS) Organization. Her chapbook, “Priestess of Tankinis,” is forthcoming from Game Over Books. She believes in the magic of blue bicycles and orange lipstick, and she hopes you think her bangs are not too long. Sara Mae the 2017 Individual Poetry Slam rep for Slam Free or Die, a 2018 Emerson College CUPSI team member, and, for the first time, a Boston Poetry Slam Team member.

Scheduling and Performance/strategy coaching for the 2018 Boston Poetry Slam Team was coordinated by SlamMaster Simone Beaubien. The team is no longer bookable as a single entity: please see each poet’s individual page for booking info, or contact slammaster@bostonpoetryslam.com.