The 2015 Boston Poetry Slam Team was selected through a seven-poem slam series completing on April 1, 2015. The team is widely published and wildly talented; all five poets mark multiple National Poetry Slam appearances— although three will slam for the BPS for the first time this year— and two are bound for MFA programs this fall. The team may be booked as a group or individually in the months leading up to Nationals by contacting slammaster@bostonpoetryslam.com. 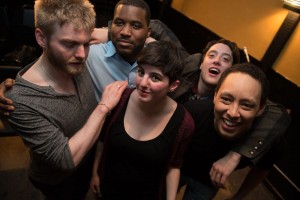 Marshall “Gripp” Gillson is a nerd by day and a poet/rapper by day also. He was born in Providence, Rhode Island and holds both a BS and an MS in Computer Science. He has represented five different slam venues in four different states in national competition, including placing 15th in the 2014 Individual World Poetry Slam representing Providence. He is also the founder and editor of the independent literary magazine The Misanthropy and boasts recent publications in Maps for Teeth, Three Line Poetry, the depression-themed anthology Light as a Feather, as well as several self-published chapbooks. As a rapper, he has released five independent LPs, two mixtapes, several compilation albums, and a number of mythical creatures from captivity.

Bobby Crawford is the Boston Poetry Slam’s former Champion of Champions, 2013 World Qualifier winner, occasional fill-in bartender, and reserve supply sex symbol. He is a six-time national slam team member and currently coaches the Emerson College CUPSI slam team. His work has been featured around the United States, and his first full-length collection, Only Show In Town, was published in 2014 by Wilde Press. This is Bobby’s first time on the Boston Poetry Slam team.

Sophia Holtz is a writer, performer, and sometimes-illustrator. Her work has appeared or is forthcoming in RHINO, decomP, H_NGM_N, and other journals. She competed at the 2015 Women of the World Poetry Slam, and was a member of multiple Hampshire College NPS and CUPSI teams. This is her first year as a member of the Boston Poetry Slam Team. She will enter NYU as a candidate for the MFA in Poetry this fall.

Born and raised in Southern Virginia, the house where Sean Patrick Mulroy grew up was built in 1801 and was commandeered by the Union Army during the Civil War to serve as a makeshift hospital. As a boy, Sean loved to peel back the carpets to show where the blood from hasty surgeries on wounded soldiers had stained the wooden floorboards. Now he writes poems. Sean has slammed for teams from Hampshire College to NYC to Omaha, but returns to his home slam this year four a fourth time before departing for his MFA program in the fall.

Performance coaching for the 2015 Boston Poetry Slam Team is coordinated by Simone Beaubien.