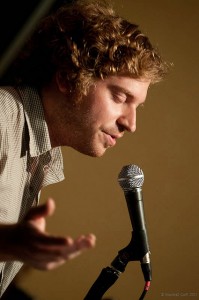 Steve Subrizi first visited the Cantab in 2004 on a field trip with an Emerson College writing group. He has been a regular for most of the time since. At the Cantab’s downstairs bar on Wednesday night, a “Steve Subrizi” is a Maker’s Mark and tonic with a lime wedge, but Steve Subrizi has not had a Steve Subrizi in at least three years, which is not a metaphor.

Steve is the author of one e-chapbook, Newly Wild Hedgehog (NAP, 2011). His work has appeared in such other places as Neon, OVS, The Scrambler, Muzzle, Monday Night, and Nailed, and he has performed his poetry at dive bars and lecture halls across America alone, along with tour-mate and confidant Sam Teitel, and as a member of Emerson’s premier slam team, The Gringo Choir, which also included Carrie Rudzinski, Maxwell Kessler, and Carlos Williams.

He is also a singer-songwriter, and he released his first studio album, Home Alone Forever, in June 2013. A horror movie–themed second studio album, Evil Beds, was released in October 2015. He is a recurring cast member (“Intern Steve”) and contributor to the Encyclopedia Show: Somerville.

Steve is on indefinite hiatus from the Boston Poetry Slam. For further reading and contact information, visit www.stevesubrizi.com.